Why Shifting Can Be Tricky

Other Things To Try

Here, in Juneau Alaska, keeping my Bike Friday shifting correctly seemed like it was gong to become a full time job. We get rain ( lots of rain). Our trails are muddy ( very muddy). My Llama finally reached the point where all of my arm strength on my twist shifter was required to get a down shift. Up shifts could be accomplished by twisting the shifter and reaching back with my right foot to nudge the derailleur loose. I finally decided that this was too much and started working. I spent a great deal of time figuring things out, so let me share some tid-bits.

Why Shifting Can Be Tricky

The cable path on a Bike Friday is lengthy and there is more housing than on most single bikes. This is caused by two factors:

Longer cables and more housing increases drag (friction) on the inner wires. When down shifting the derailleur, you can overcome a great deal of cable friction by simply supplying more power from your body (wrist, thumb or arm depending on the type of shifter you use). It may not be pleasant, but down shifts can be achieved. Up shifts, on the other hand, are performed by releasing cable from the shifter. The cable goes slack and the spring on the derailleur moves the chain down the cluster until the cable is once again taught. If there is too much friction on the inner wire, the derailleur spring will be unable to overcome it, and you will be unable to shift to a higher gear.

To remove some of this cable friction, I followed a tip from Doug Heydon of Bike Friday, and installed two Avid Rollamajigs

The second was modified to work in place of the sharp bend in the cable above the bottom bracket. My Llama came set up with the rear brake cable routed to the outside

of the derailleur cable (as it made its way down the mono-tube). I swapped the locations of the derailleur cable and rear brake cable. It required that I readjust the rear brake, but it let the new Rollamajig be mounted where it could move freely on the frame. Because it isn’t installed in its originally designed position, the second Rollamajig required the addition of a small cable adjuster from my parts bin, but it works very nicely now.

Another option in this location is a Travel Agent from Quality Bicycle Products (QBP).  This device is designed to be an adapter to allow the use of direct pull (V) brakes with standard brake levers.  It does, however, offer a straight around cable path that is just what is required here. It is available with or without a cable adjuster. 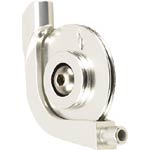 Check your LBS for availability

To try to reduce the amount of water collecting in the section of housing under the bottom bracket, I installed cable ends with o-ring seals at the second Rollamajig (visible in the photo above) and at the shifters. I reached in my parts bin and found some Shimano Deore XT sealed cable ends circa 1989. I’m not sure they are still available, but something similar could probably be made with a standard cable end with a separate o-ring of the correct diameter inside. I suspect that the o-rings add a little bit of drag, but it does keep the water out of the housing..

Other Things To Try

This page dates from the late ’90s. A lot has changed in bicycle, photo, and web technology since then. Please accept the information and images in the spirit in which they are intended, dated but possibly helpful.

Product images used here are copyrighted by the product manufacturer. Unless otherwise stated, all other images presented here were created by, and are copyright by, John R. Thurston of Juneau, Alaska. You may view them, print them, tell people about them, and comment on them. You may not copy them, edit them, or use them for financial gain without permission.
Feel free to link to any of the HTML pages, but please do not create links directly to any of the images.
The author can be reached at yak-web@nullthurstons.us